We have started our Coastal Environment topic by looking at the elements and features that exist. Today we were starting to focus on the processes operating in our coastal environment of Muriwai. The introduction to these processes can sometimes be dull as we trudge through the necessary diagrams and explanations. This year I was determined to make this more interactive. I borrowed some sidewalk chalk and a bucket of balls from the PE department and we spent the period moving back and forth from classroom to a courtyard outside.

We started the lesson by quickly recovering the ideas of erosion, transportation and deposition they had learnt last year and talked about how the main 2 agents at Muriwai are waves and wind. I then drew a quick diagram of a waves orbital motion and how it becomes elliptical in shallow water. Something like this image below that I grabbed from Google images sourced from meted.ucar.edu 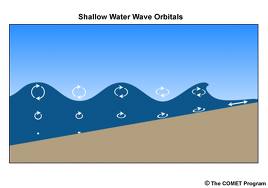 After a class discussion about this action we then moved outside where I had drawn the following lines on the courtyard representing a coastal environment and the wave orthogonals:

The class then stood along the furthest line out and moved in 1 line at a time seeing what happens to the wave as different parts meet friction on the seafloor at different times. The class discussion while standing there saw them using terms such as folding, bending, slowing down and erosion of the headland. They had understood wave refraction with no notes whatsoever. At this point they were sent back inside to draw and/or write about wave refraction.

We then went back outside and set up in 2 lines where half the class were a wave approaching the coastline at an oblique angle. The students who were the beach had 2 tennis balls each and the wave students were allowed to take one ball each time they reached the shore and moved along the line. After doing this numerous times the tennis balls were obviously gathering at the far end of the ‘beach’. Once again back to their books to describe Longshore Drift.

I then led a class discussion about what was needed for wind to move sediment. The class quickly covered ideas of slope angles, dry vs wet sand, wind velocity and direction and different densities of sand. While we were discussing this I was using a tennis ball to illustrate surface creep vs saltation vs suspension. Once again, back outside in pairs with one ball between them. I would call out each type of aeolian transportation and they would pass it to their partner by rolling (surface creep), bouncing (saltation) or throwing (suspension). After a few minutes of this they were back to their notes drawing diagrams of each form of aeolian transportation.

None of these activities are groundbreaking – I have seen numerous old videos of students moving as waves along a beach – but it is so easy to get caught up in writing notes with Year 13 students that we forget some of these timeless learning techniques. As the students left I had a lot of comments about how many new terms they had learned in the hour but how they actually knew what each one of them meant. The perfect reflection at the end of our first period looking into coastal processes!