Many people may get annoyed with this post, in fact it may even be considered sacrilegious by some. Sir Ken Robinson is extremely well known, liked by many and revered by some. His TED talk from 2006 has been watched almost 35 million times. Yet on finishing his most recent book I was left with an overwhelming sense of “meh.” 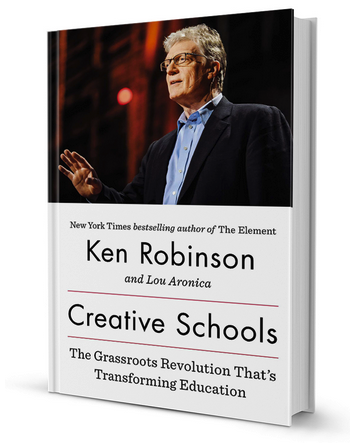 The first few chapters are a rehash of his earlier talks and books on why change is needed in education. He does eventually introduce some new material/angles on how things should be operating. These new angles are nothing new for those who have been working to make schools more future focused already:

Advisories: What we call Learning Hubs here at Hobsonville Point Secondary School, popularised by Dennis Littky and the success of the advisories at The Met. More detail on these can be found in The Big Picture by Dennis Littky.

PBL: Like shared widely on websites such as Edutopia and particular mention for Design Thinking (hooray for my last 2 years working on this!) such as that spread through schools by groups such as NoTosh and discussed weekly on #dtk12chat.

It also seems that Sir Ken has caught up on viewing Schools from the perspective of Complexity. In New Zealand we have Edge Work – Educational Futures Network that has recently started working with teachers to think this way, Grant Lichtman proposed a Natural Ecosystem of Learning in #EdJourney released last year and Brent Davis, Dennis Sumara and Rebecca Luce-Kapler have been writing on this for a decade.

All of this added up to make me think so what? This is Ken Robinson, shouldn’t he blow my mind!? Yet, there was nothing new in this book for me. I did lots of nodding my head, agreeing with things he was saying. Much of this book really affirms what we are doing at HPSS. Yet my normal need for post its to note down parts of the book never eventuated. I finished the book with 2 lonely dog-ears to mark 2 pages that had good examples of explaining personalisation to people.

This has all made me think:

Mind blowing when you first across him and his ideas. But after you have been working on these ideas and deepening your future focused practices for a while, he has far less of an impact.

If you are no longer in need of a salesman to these ideas, then Sir Ken is probably not going to push your thinking much. Next up for me to read are Creating Innovators by Tony Wagner and Deeper Learning: Beyond 21st Century Skills. Hope these 2 push my thinking a lot further than this did!