Finally it seems to have happened – people are looking at e-learning as part of effective pedagogy!

Devices, technology, browsers, e-tools, apps whatever you want to think of as e-learning are not a separate entity and should not be viewed that way. For quite some time now I have been having discussions with people about technology in education and have been frustrated by how often the conversations focused on the what rather than the why. Last week it seemed to me that a major corner has been turned.

On Wednesday afternoon I presented a case study in a Webinar on the Virtual Learning Network about Secondary Curriculum, NCEA and E-Learning. This webinar was focused on how elearning tools can enhance the effective practice in our classrooms. Initially planned for an hour, time was eventually called after 1 hour 15 minutes as the discussion was still raging!

My section was about Guerrilla Geography which I have spoken about widely but I have not focused on the role of e-learning in this before. When invited, I wondered if it fit the purpose of the webinar but I soon reflected that e-learning is a part of enhancing this. I spoke about how it is a pedagogy that works well with chalk, post-its and an open mind but could be made better with some research, QR codes and Aurasma. You can view the whole webinar here or join in the continuing discussion on the role of e-learning in enhancing learning for seniors here.

This theme of e-tools just being a part of the arsenal of effective pedagogy continued in conversations at school as we discussed our leadership structures for next year. Claire will be leading us through our teaching as inquiry process which will focus on “How e-learning can enhance the development of the Hobsonville Habits.” Once again, the recognition of the why – the Hobsonville Habits, which are our learning dispositions – being in the driver seat. E-learning can enhance our practice it is not the aim in itself.

“Remember the Why” was reinforced, yet again, at the TTS Education breakfast. I was worried that the talk here may focus on the technology as an aim but was very pleasantly surprised by the conversations. It was centred on what people are trying to achieve and how some tools help these aims far better than others. The aims were varied but it was heartening to hear a Technology breakfast focusing on words like collaboration and reflection rather than what apps people were playing around with.

I do use technology in my lessons but often as a part of using traditional tools such as paper, colouring pencils (I am a Geography teacher after all!) chalk or books. I know that I am really engaging in effective practice when a whole mix of these tools is being used in the same lesson. The lessons I think of when I reflect on my best practice, involve these different technologies seamlessly integrating themselves. This was what I was trying to demonstrate when I made this ‘sculpture’ to represent me being “In the Zone.” 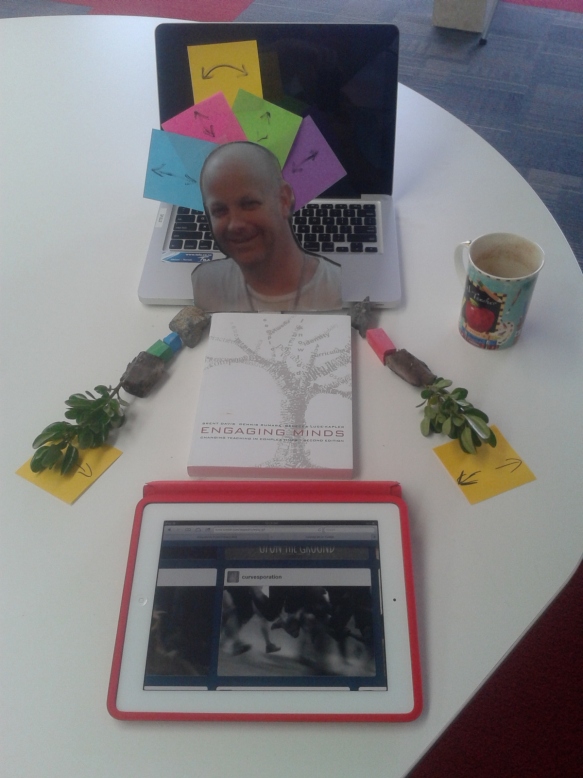 I’m sure that I will still have conversations with people that talk about WHAT great e-tools they have used or plan to use hopefully the majority of these will FOCUS ON THE WHY.